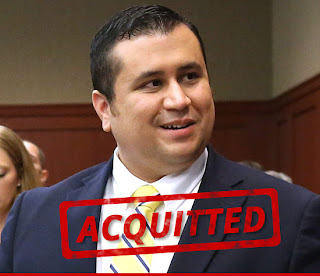 Beyonce halts a concert for a brief moment of silence and other celebs all over the globe took to their social media outlets to vocalize their dismay in the justice system and the travesty of justice that resulted in an acquittal in the murder trial of the man accused of gunning down an innocent Skittles and Arizona tea carrying 17 year old named Trayvon Benjamin Martin. The accused, George Zimmerman was released upon the public after an acquittal was rendered by a jury of six women July 13, 2013.

Read some of their reactions below....what did you think of the verdict? Care to share?

Mike Epps: “George Zimmerman found not guilty....are you freaking kidding me??? Justice system moved back 100 years”
Ellen Page: "If u really believe racism isnt a massive problem, that the oppression of minorities is not a horrific and systemic issue. U R in denial."

Rick Ross: "My condolences continue to go the Martin family."
Mia Farrow: "I don't understand this. At ALL"
Steve Harvey: "A Child is Dead & The Man that Killed Him is Free & Again The Child is Black...My Country Tis of Thee?"
Shaq: “George Zimmerman not guilty can u believe that. Wow”
Richard Dreyfuss: "It's 2013 and an American jury just acquitted a man who admitted to stalking and killing an unarmed child."
Kevin Hart: “I give Zimmerman a week" and then he also tweeted this, “Michael Vick went to jail for killing a DOG and Zimmerman killed a innocent human and goes free”
Judy Blume: "Not surprised. But distraught. Saw 'Fruitvale Station' tonight. How ironic to come home to this verdict."
Talib Kweli Greene: “The way this Zimmerman case divides us shows how far we still have to go as a country. I pray Trayvon's family receives justice.”

Kate Walsh: "Zimmerman verdict sickens me."
Chad Johnson: “Zimmerman is a free man but is he really FREE...”
Kat Dennings: "I can't handle this. All that really matters are Trayvon's parents, and making sure nothing like this ever happens again."
Questlove: "this might be in bad taste but in light of this verdict? i really INSIST you people see Fruitvale Station not now but RIGHT NOW"
Tom Arnold: "Dear Son, I love you and there is no shame in running away from creepy ass crackers. #nojustice"
Michael Ian Black: "The only thing that surprised me about the verdict is that juries work on Saturdays."
Ice Cube:  “The Trayvon Martin verdict doesn't surprise me. Stanford, FL never wanted Zimmerman arrested. Now he's free to kill another child.”
Donald Trump: "Zimmerman is no angel but the lack of evidence and the concept of self-defense, especially in Florida law, gave the jury little other choice"
Chris Brown: "Bulls&*(!", followed by "This ^&*$ is crazy!"
Gabrielle Union: "Help! What's the proper procedure when you're followed by a random armed nutbag returning home from getting candy & iced tea?"

Alec Baldwin: "Florida is a parallel universe. A f#$ked up one."
Whoopi Goldberg: "My heart is with trayvon martins family tonight, so my focus on them. No one else really matters"
Jaleel White: "I can't ..."
Mandy Moore: "My heart is heavy...for all who knew and loved #TrayvonMartin. His life mattered. This is shameful."
Chris Rock: “So the police tell you to do something you ignore them somebody ends up dead . Isn't that in itself a crime.”
Russell Simmons: "I know many people are very upset about the verdict, but we must remain peaceful. No matter what, remain peaceful."
Michael Strahan: “In shock over this.... Wow! Just wow!”
Nicki Minaj: "And our taxes paid for that trial. We just paid to see a murderer walk free after killing an innocent unarmed little boy. #GodBlessAmerica"
Bill Maher: “This is America waddya expect? The only thing u aren't allowed to kill in an instant is a fetus. Hey Zim, find another hobby now that u won”
Sophia Bush: "The wind is more than knocked out of me... My heart aches for this boy's family. Justice System? I don't think so. #justicefortrayvon"

Michael Moore: “Had a gun-toting Trayvon Martin stalked an unarmed George Zimmerman, and then shot him to death... DO I EVEN NEED TO COMPLETE THIS SENTENCE?”
Rihanna: "This is the saddest news ever!!! #whatsjustice #pray4theMartinFamily"
John Legend: "My heart hurts"
Will.i.am: “There are black people in prison serving 10 to 20years for petty drug crimes...and zimmerman walks for killing a younge black man??? #ouch”
Lena Dunham: "No. My heart is with Sybrina Fulton, Rachel Jeantel, everyone who loved Trayvon and has been sent the message that his life didn't matter."
Kim Kardashian: “My heart goes out to Trayvon Martin's family & loved ones. Thought & prayers being sent their way #NoJustice”
Mario Lopez: "Hope people don't misbehave after hearing this verdict... Pray for the Martin family."
Keri Hilson: “I have no words for the verdict. But I know God is in charge. No words.”
Josh Groban: "Oh no. Seriously? Crap."
Trey Songz: “Can't even gather words to express my hurt for Trayvon's family. Devastated”
Miley Cyrus tweeted twice. "No justice. No peace," she wrote, followed by: "The world is a scary place."
I have also read the reactions of those who agree with the verdict. Comments like "Traygone" lived a "thug-life and died like a thug" or comments in reference to his prior"thuggish" activities or shenanigans, suspensions from school and marijuana usage and the indifference to Trayvon Benjamin Martin being referred to as an "innocent teen" the boy was unarmed, stalked on a dark, rainy night by a grown-ass man that was told to fallback. In that regard he was an innocent boy in a fight or flight ssituation who attempted to save his own life by any means necessary.
beyonce celebs concert martin reactions trayvon trial verdict
Location: Bay Terraces, San Diego