This is why distressed postal workers should be feared because of shenanigans like this here. Peep the article... 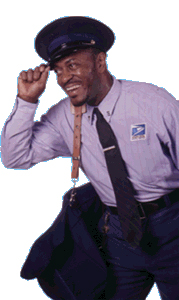